Today, January 18th, is the birthday of one of the world’s most special women. My grandmother Vera Gottfried Norman was a symbol of strength and courage in a world full of obstacles. Vera’s life was set against unlikely odds when she was born to Jewish parents just before the onset of the Holocaust. Vera’s father, Oscar, was the youngest of ten siblings who were all eventually killed in the atrocities of the Nazi regime. There were horrors beyond belief taking place outside every window and on every street corner. The Nazis shot and killed Vera’s brother Carleys before her own eyes when they were asked for their papers on a street corner yet had none to show. Vera’s entire immediate family was murdered, and Vera was the sole survivor. To protect her, Vera’s parents had given her to the Nuns with whom she lived in a convent in Antwerp, Belgium until the war was over. Vera remembered a man who she thought was her father occasionally coming to dance with her. He eventually stopped coming, and Vera felt discouraged to ask about him. Vera was a “hidden child”: the sisters raised her as though she was an orphan and a catholic, but even this effort could not fully keep her out of harm. She wandered the streets during the day to prevent being caught when the Nazis checked the convents. Vera remembered many of the catholic principles she had been taught while living in the convent and applied them to her later life.
When the war was finally over, the Red Cross found Vera and told her that she had family waiting for her in the United States. Before she was allowed to immigrate to the US, Vera spent many months in a health center recovering from a lung illness, and we are still unsure whether she ever fully recovered from this condition. After she was released from the health center, Vera took a long sea voyage across the Atlantic upon the S.S. Constitution. She remembered that a family was paid to take care of her, but they did not. She remembers that they were not kind to her and did not think she could understand their language. However, she was tri-lingual, and could in fact understand their conversations.
Upon Vera’s arrival to New York, she was greeted by complete strangers who claimed to be her paternal cousins. Vera lived in New York City for a few years before moving to the suburbs of Connecticut where she went to school, got married, and had three children. After 12 years of marriage, her relationship ended, and she moved away to another town with her children and the love of her life, Michael. Vera graduated from the University of Connecticut as Summa Cum Laude and as a Junior Year Phi Beta Kappa. She later went on to earn her Master’s degree.
Vera was a brilliant thinker with a passion for learning. She always pursued her love of philosophy and history. When I was unable to attend school, Oma brought school to me. Twice per week she came to my house to read and discuss history, poetry, and current events with me. My Oma wanted me to hold on to my love of learning and constantly encouraged me to continue to set goals and never give up hope, no matter how sick I was. She inspired me to keep pushing on in spite of my illness and insisted that I pursue higher education even though I have medical limitations. My Oma believed strongly that there are many ways to obtain your goals; you just have to find them.
Vera’s struggles in life were many, especially when she was diagnosed with terminal cancer at the young age of 67. During the last years of her life, she surrounded herself by the love of her husband, children, grandchildren, and friends. Vera loved her family more than anything. She reminded us frequently that life was very fragile but meant to be enjoyed. Vera spoke of her choice to be happy even in the face of never knowing her parents, leaving her home at the convent in Belgium, and starting all over in a new country. We will always admire her thoughtful insights and honest advice. Vera’s wisdom lives on in all who knew her and her love shines through her children and her grandchildren. Happy Birthday, Oma. We love you and miss you so.

Celebrated as two separate festivals, January 11th and January 15th in ancient Rome honor Carmenta, the goddess of birth. Carmenta was the leader of the four Carmenae, whose group also consisted of her sister-goddesses Antevorta, Postvorta, and Egeria.  Carmenta was a deity associated not only with pregnancy and childbirth, but also with fertility, prophecy, and technological advances. Although the cold weather and cropless season of Winter may seem like a strange time to celebrate the goddess of birth, January is exactly 9 months after April--the most popular month for marriage.


As for Carmenta's origin, some believed that she came to Rome from Greece where she had been serving as a prophetess of Aracadia. These people believe that her name was initially Nicostrate and that she had a son named Evander who killed his father leaving himself and his mother with no option but to flee to Italy. Once in Latium, Nicostrate became known for her prophecies and was revered as a deity. The Italians renamed her "Carmenta" for the Latin word "Carmen" meaning "charm". Carmenta is credited with the invention of the Latin alphabet and supposedly altered 15 Greek letters to form it while Evander is known as one of the heroes in Rome's foundation.


To celebrate the holiday, Romans would bring offerings to Carmenta's sacred temple, located southeast of the Capitoline near a gate called the Porta Carmentalis. It was important to remember not to wear leather or any clothing made of animal skin into Carmenta's temple because it would be disrespectful to her emphasis on new life.  Women brought milk, honey, cereal, grain and herbs to Carmenta's temple and would pray to her for fertility and an easy pregnancy. The women would speak to wise old members of Carmenta's cult, who would tell them of their unborn children's future. 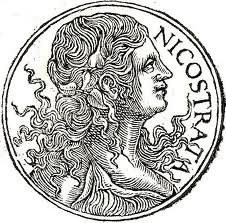 Posted by Ariana at 8:25 PM No comments: