Every year on March 28th, the Japanese make a special point of remembering Sen no Rikyu, a man who was pivotal in the formation of the contemporary Japanese tea style. Sen no Rikyu was born in 1522 under the name of Yoshiro in the merchant city of Sakai. He initially studied traditional tea ceremony but eventually moved on to learn about the contemporary tea ceremony under the guidance of many influential tea leaders.


Sen no Rikyu began studying zen at the Daitoku-ji Temple in northwest Kyoto. The temple was renown for "a deep relation with tea", and it was while he was studying there that Rikyu (who was then known as Yoshiro) changed his name to Sen Soueki. By the time he was 58 years old, he was serving as a tea master, and 5 years later he received the honorary title of "Koji". After the being awarded this esteemed Buddhist rank, Rikyu changed his name once more to Sen no Rickyu Koji establishing his prominence among the other Japanese tea leaders.


Sen no Rikyu left a legacy in the Japanese tea culture through his contributions to tradition. Rikyu believed that the 4 qualities that should be represented in a tea ceremony are:
-Harmony
-Respect
-Purity
-Tranquility


Rikyu also introduced several new behaviors into a contemporary Japanese tea ceremony, including:
-A tea house should hold 5 people.
-Utensils should be washed in a small separate room.
-There should be two entrances to a tea room: one for the host and one for the guests.
-The doorways should be low so that one must bend down to enter, humbling one's self for the ceremony.


One of Rikyu's most well-known sayings is:
"Though many people drink tea,
if you do not know the Way of Tea,
tea will drink you up."


Another one of his well-known quotes is:
"The Way of Tea is naught but this:
first you boil water,
then you make the tea and drink it."
This quote exhibits Rikyu's zen, simplistic view of the tea ceremony. 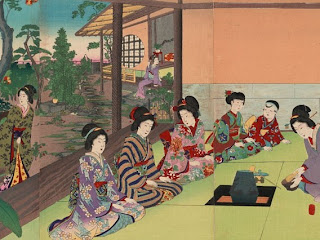 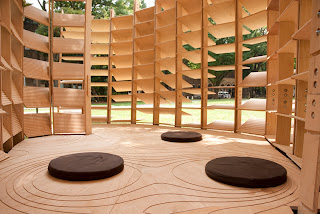 Falling on the same day as the United Nation’s International Day for the Elimination of Racial Discrimination, Harmony Day is celebrated in Australia. The holiday began in 1999 and is managed by Australia’s Department of Immigration and Citizenship (DIAC). Harmony Day is celebrated to acknowledge the cultural acceptance and diversity of the Australians. It is an opportunity for the nation to come together and embrace the many different cultures and heritages of its people.
Harmony Day is celebrated predominantly by wearing orange or an orange ribbon to show one’s support of the day. People also host morning teas, dress in national costumes, and participate in sporting events. People organize and play soccer games on this day because soccer is considered a “world sport”. To celebrate, I wore orange and spread the word of the Australian holiday!
Sources:
http://www.harmony.gov.au/
Posted by Ariana at 6:15 PM No comments:

“Beware the Ides of March”
-William Shakespeare’s Julius Caesar
The Ides of March is the traditional Roman calendar’s name for the 15th of March. However, the significance of the day is far more than simply a date. The Ides of March marks the day in 44 BCE when Julius Caesar was murdered by a conspiracy of Roman Senators led by Marcus Brutus who referred to themselves as “the liberators”. The conspirators convinced the public that by killing Caesar, they were freeing the Romans from a harsh dictator who was a threat to the established Roman Republic. Whether Caesar was a true tyrant has been analyzed frequently in literature and is still debated today. The most well known literary representation of the sequence of events is William Shakespeare’s Julius Caesar in which Shakespeare depicts Caesar as an dominant oppressor and Brutus as a tragic hero. However, the poet Dante viewed Brutus as a traitor who is “doomed to the lowest levels of hell” for killing the man who spared him.
In the end, it seems that Caesar’s legacy has lived on and that the Ides of March has served as a warning for future rulers to be careful in how they politically present themselves. I believe that this history shows the power in a group of people unified against a common cause and the danger in having too much control. March 6th is celebrated as Foundation Day on Norfolk Island, a small island located west of Australia, because it was the day Lieutenant Philip Gidley Kingand his crew of 15 convicts and 7 free men arrived on the uninhabited land. Lieutenant Philip promised the convicts rights and citizenship if they worked hard to establish the island. Coming from England, the men took ownership of the Norfolk Island intending upon using it as a foothold for Britain in the Pacific. They also wanted to use the island for its resources including pine trees, flax, and nutrient-rich soil. However, the flax was too difficult to prepare, and the pine trees were not resilient enough to be used as masts. So, Norfolk Island was mostly used as a farm on which to grow food to feed the starving city of Sydney.  The island is now know as a friendly place to live a chill lifestyle.
On the morning of March 6th, to celebrate Foundation Day, the people of Norfolk perform a re-enactment of Lieutenant Philip’s arrival by boat onto to their island. People drink a mixture of orange juice and wine while toasting to the King and hoisting up the Union Jack (another name for the UK flag). This year marks the 224th anniversary of Lieutenant Philip’s first settlement on Norfolk Island. The Norfolk people presenting their re-enactment of Lieutenant Philip’s arrival.

The Norfolk Island flag. The flag has a pine tree on it presumably representing the plethora of pine trees on the island. Pronounced Martz-E-shore, it is the celebration of the start of Spring in Romania. The ancient story of Martisor tells of a hero’s red blood falling on the white snow causing the sun to return and put an end to the eternal Winter. That is why the colors of this holiday are red and white. The most prominent symbols of Martisor are the snowdrop flower and the Martisor, an intertwined piece red and white thread. Girls tie the red and white thread Martisor in their hair and wear it for sometimes up to 2 weeks before tying it to a tree for good luck and fruitful crops in the coming season.
To celebrate the holiday, I dressed in red and white and made my own Martisor out of red and white ribbon (pictured below).  I waited until today to hang the home-made Martisor in a tree for good luck (also pictured below). 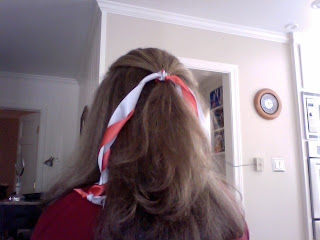 I wore my Martisor in my hair like this all day. 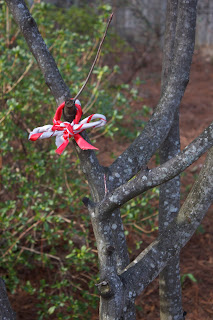 My Martisor tied to a tree in my backyard.